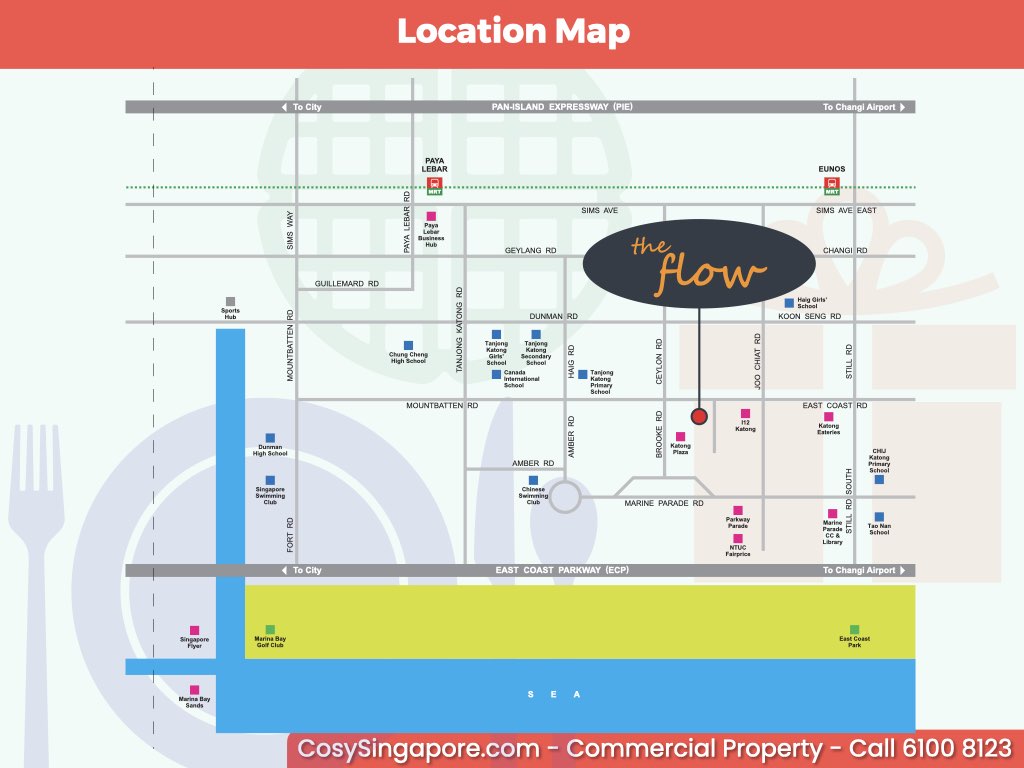 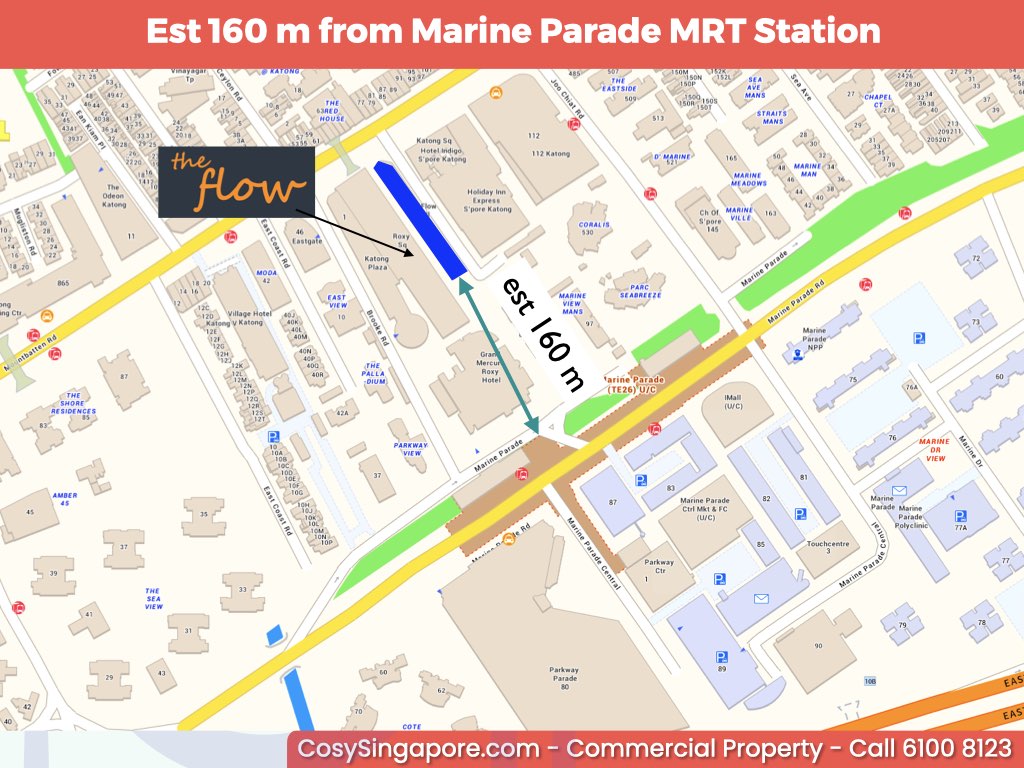 Located at this part of the East Coast Road in District 15, where the ‘East Coast Village’ starts, the Flow Mall serves as a very bright spot with its vibrant design and interesting concept. It sits on a foodie haven, offering heritage eats to hipster cafes. It also sits with a myriad of boutique lifestyle stores and colourful Peranakan shophouses. With such strong attraction, this mall will be able to pull traffic, not just from the East siders but from all around Singapore.

The Flow Mall is around 160m from the up and coming Marine Parade MRT Station, due to be operational in 2023. It takes about 15 minute to drive to the Central Business District and Changi International Airport. 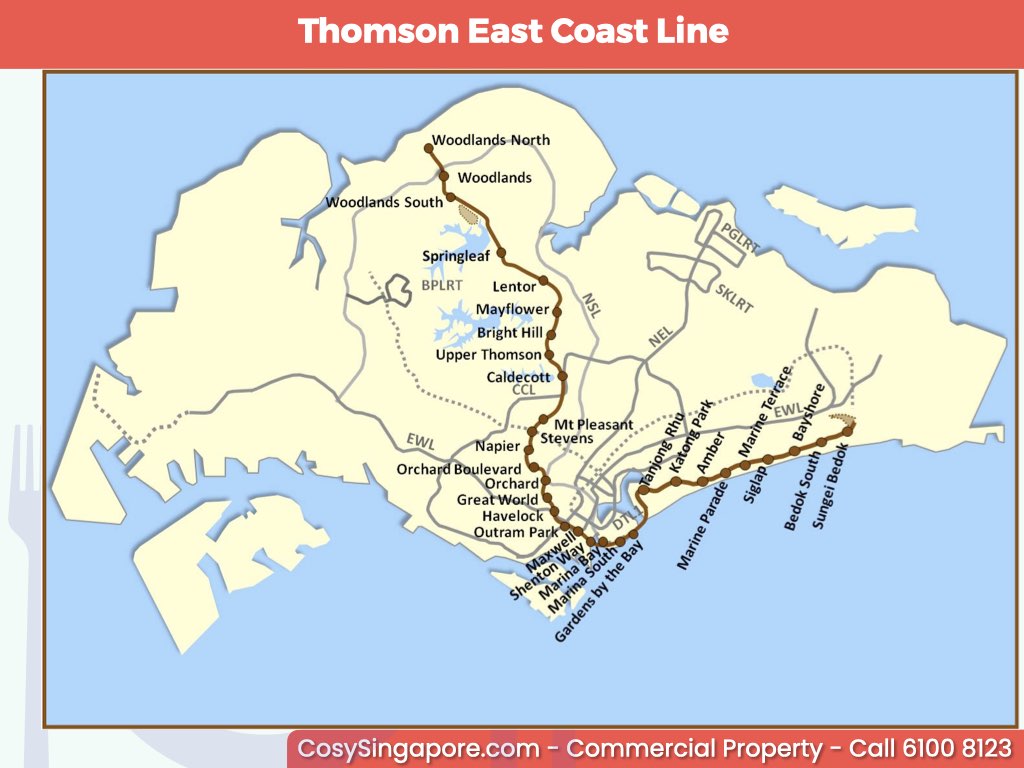 The Land Transport Authority (LTA) made an announcement in August 2014 with great exciting news for all living in the East. The locations of the east coast portion of the Thomson East Coast Line (TEL) were announced. TEL will have 31 stations, linking the east to the heart of the city and it will also connect commuters to the North-South Corridor.

The stations with specific locations along the Eastern Region are:

Four of the stations Marine Parade, Marine Terrace, Bayshore and Sungei Bedok will have underground bicycle parking facilities. These will be completed in two stages. The first seven stations from Tanjong Rhu to Bay is to be ready in 2023 while the remaining two stations and the depot is to be completed in 2024.

In May 2016, LTA announced that they would develop an underground linear retail space at Marine Parade Station of 133,000 sqft in a single level. This will site above part of the tunnel connecting Marine Parade and Marine Terrace Stations.

This would serve impulsive shopping or a quick meal type of transaction from the commuter traffic, as the space would likely cater to small tenants. Existing malls above ground would serve more crowds with larger tenants with more facilities such as car park. These ancillary retail outlets for commuters will not have big impact to the nearby bigger malls. 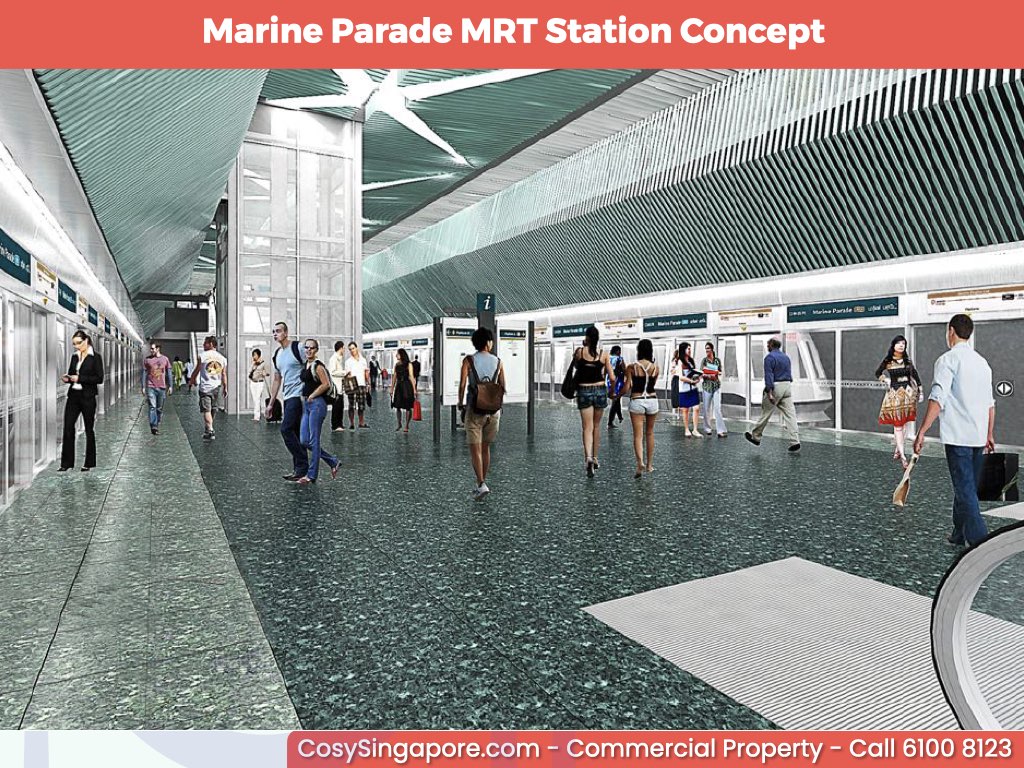 The Flow is estimated to be only 150 m away from one of the entrances to the future MP station. It would take about 2 minutes for commuters to walk casually. With many choices of shopping and food, commuters would be attracted to this part of East Singapore.

Currently, there is no MRT near to Marine Parade and Parkway Parade is the only choice shopping centre and can get quite crowded over the weekend. It is attracting those who can drive or take a bus there.

With the future Marine Parade Station, it will be very convenient for commuters to come from various part of Singapore. It is expected to draw more people from the other parts of East Singapore, such as Bedok, Tampines and Changi.

Some of attractions of The Flow to skew commuters are the food court, restaurants and the medical suites. Food is a favourite of Singapore and patrons of the shops and with The Flow dedicating a sizeable portion of the space to food and beverage outlets would attract diners to the building. The medical suites would also provide a steady flow of patrons to the shops.

For patrons of the medical suites, patrons would have the benefit of having a meal before or after consultation. For those who need frequent attention and if they are from overseas, they would be able to opt to stay at nearby hotels such as Grand Mercure Roxy Hotel or Village Hotel Katong.

The atmosphere at Marine Parade is different from other parts of Singapore. It is the gateway to the East Coast Park and perhaps the sea breeze would certainly bring in more people to this part of Singapore.

The value of shops in The Flow would likely go up since it is considered to be near to the MRT station and moreover, units have freehold tenure.

Such FREEHOLD Opportunity is RARE, start by...

Booking An Appointment for a Viewing of Retail Shops at The Flow.  Let us explain why this is a Rare and Absolute Freehold Retail Shop Unit Ownership.  In addition, get to enjoy VVIP Discount (Limited Time), and Guaranteed with Best Price Possible

Filling up the form and get a copy of The Flow Prices, E-Brochure and Latest Updates!